Hi friends. Children and adults alike also want to hide cool robots, but unfortunately they can be seen only on the net in foreign videos. And how do you like the idea of ​​assembling your walking robot from an inexpensive domestic designer who can recognize homework, walk the stairs, walk in the yard and bring various objects.

We are pleased to present our Tetrabot robotic project, which will help realize your child’s dream or your dream of your walking robot. From our constructor you will not collect a toy, but a small assistant robot. An artificial pet can be taught a lot, for example, to pack things in a room, navigate in the surrounding space, walk around an apartment, around a house, up a staircase and a yard, learn and communicate. The designer will help you quickly master programming, the basics of electronics and mechanics. Robotics is the profession of the future! 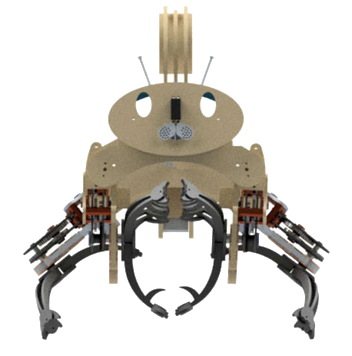 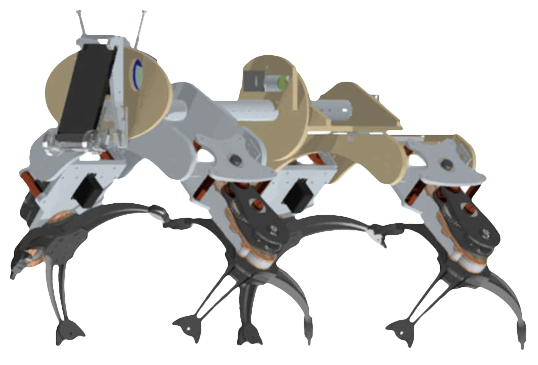 Almost all created robots in the world copy animals or humans, they are called biomorphic or biosimilar. But this leads to the need to use dozens of servos with gears that replace the muscles. Our robot has no analogues either among other robots or in wildlife. At the heart of the robot is a unique patented movement mechanism. It is distinguished by high passability and only one servo drive per limb, which is used as an unusual tripod. This was made possible thanks to the invented mechanism for compensating for vibrations that occur during the rotation of the tripod. If you rotate the tripod without this mechanism, then the vibrations of the body would be 50% of the length of the legs vertically and horizontally, which makes normal movement almost impossible.

It’s the same as if a person hesitated up and down and back and forth by half a meter – in addition to obvious discomfort such a process of movement would be extremely costly energetically. The compensation mechanism smooths out these fluctuations, which is clearly seen in this figure. At the same time, the walking platform easily moves along stairs, blockages and other obstacles. The unusual design of the legs in the form of a tripod allows the robot not only to walk, but also to take various objects with their help, while only one servo drive is added. The most sophisticated robot model from our constructor has only 5 servos, one motor and 6 absolute encoders (position sensors). A small number of motors and sensors makes it easier to program the robot to perform various actions. And the battery energy is enough for a longer operating time compared to walking robots from other designers containing more than a dozen servos. As a control board, the popular Arduino board is used, so for many familiar with this platform, programming a robot will not be a difficult task. Today, the designer is 90% ready, we just have to finalize the mechanical part before launching into mass production and “finish” the software platform for controlling a robot with elements of artificial intelligence. 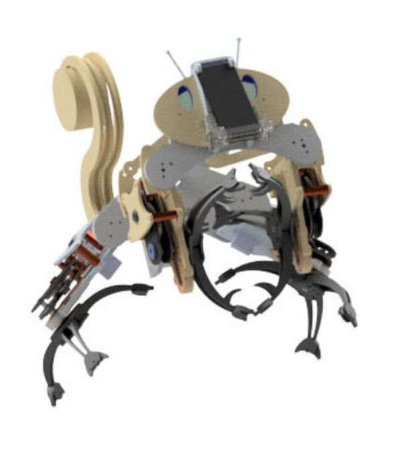 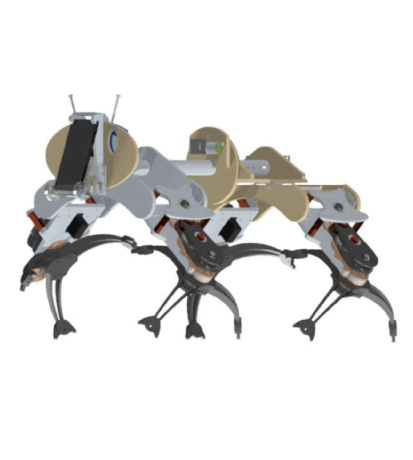 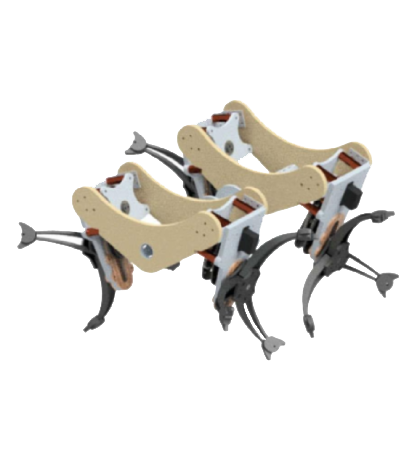 The simplest model, which uses 4 servos and 4 position sensors. 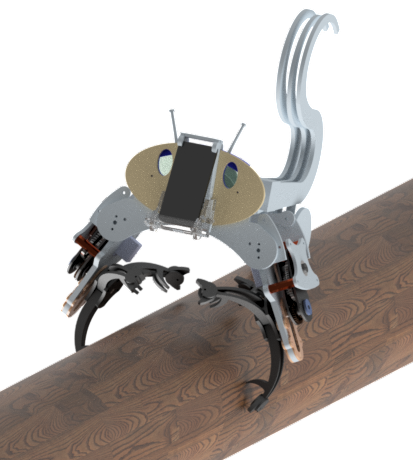 The robot is able to move over rough terrain, take small loads with its front legs and carry them on its hind legs, leaning on its tail for stability. 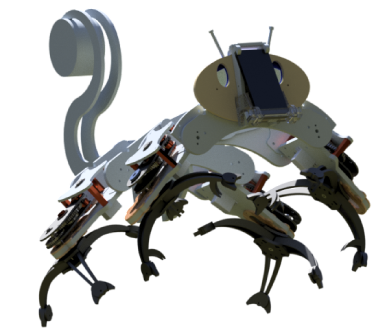 The robot is characterized by increased maneuverability when driving on rough terrain due to independent and steered bridges. Able to stand on its feet in the event of a rollover.

This model is characterized by a large power reserve and increased stability. It can be used to carry goods on its back, and also as a supporting platform for various devices, for example, for a manipulator arm.

The robot is able to move over rough terrain, rotate its tail while changing its position, squeeze the front legs by grasping them with a log or pipe, and the paw mechanism allows them to rotate without loosening the girth. This property makes it possible for the robot to move along a log, pipe, and even along a rope.